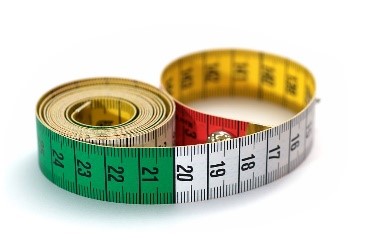 Why have we been measuring dogs?

The recovery crate, pen or room must offer sufficient space for the patient’s basic welfare needs. In particular, the dog should be able to adopt each of its natural postures. For more on this subject, please click here. In deciding which crates could be recommended for which dogs, measurements of individuals of various breeds have been taken in the “sit”, “stand” and “lie” positions.

Measurements have been taken from adult dogs of known breeds. These included dogs owned by friends, colleagues and clients, with further dogs recruited via social media. I measured almost all of the dogs myself. An instruction handout was sent to those who were happy to measure dogs themselves. A copy of this handout can be downloaded by clicking here. The dogs measured by owners were three of the standard wire-haired dachshunds and the four basset hounds.

For each dog, four measurements were taken using a measuring tape.

Standing length. This is the length of the dog in its natural standing position as measured from the most cranial to the most caudal point, with the measuring tape parallel to the floor. Where appropriate, measurements were taken with and without the tail included. 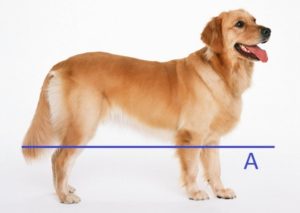 Sitting height. With the dog in its natural sitting position, this was measured as the distance from the floor up to the highest point of the head, as measured perpendicular to the floor. For those dogs that chose to raise their head to look up at their owner during measurement, we measured up to the tip of the nose. 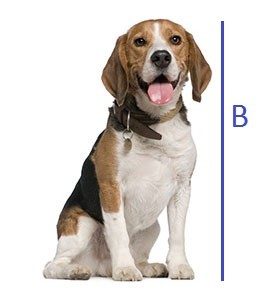 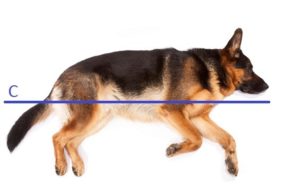 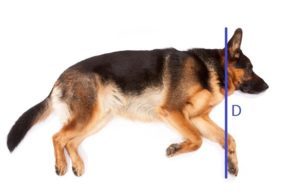 Measurements of individual dogs can be downloaded by clicking here. Results are summarised in table 1, below.

Variation within the results

Variation in body size between individuals within each breed resulted in variation between measurements of both sitting height and standing length.

There were marked differences between amounts of limb extension offered when recumbent dogs were measured. Nervous dogs, and those unaccustomed to close handling, were less inclined to stretch out in recumbency. Where soft bedding was unavailable during measurement, dogs were also less inclined to lie outstretched. These factors caused wide variation in lying length. For example, Maude is a relatively small Labrador retriever (as shown by her sitting and standing measurements), but was the only individual of this breed who chose to stretch out fully in recumbency, and her lying length is therefore higher than others of this breed.

Making sense of the results

In deciding on the appropriate size of recovery quarters for any particular dog, we need to consider the breed of dog or, if a crossbreed, its size and shape in comparison to a known breed. We may also need to take into account whether the individual is a particularly large or small example of its breed. Other factors should also be considered when allocating space to a recovering dog, including the dog’s temperament and expected activity level, and the stage of recovery.

For each measurement, a mean average and a range of values have been given in table 1. As very few of the measured dogs stretched out fully during measurement, the higher end of the range of values for lateral recumbency length is more representative of the space occupied by dogs when lying down, and this figure should be used rather than the mean value.

Measurements of the dogs in their natural postures has been used to develop minimum floor space guidelines for the recovery period. These guidelines are estimated to enable the dog to lie fully stretched-out on a deeply-bedded area with the crate, and then to stand perpendicular to this within an adjacent area of the crate. A few centimetres has been added to the width and length of floor space to allow for the thickness of bedding tucked around the edges of the crate.

Many recovering dogs will benefit from having more space than the minimum requirements listed in the table. Floor space greater than these minimum values could allow the dog to do the following:

Recommended minimum floor space allocations in table 1 have been given assuming that the recovery crate or pen has a rectangular format. If the dog’s owner has access to a pen with a square base, then they should ensure that the dog can lie fully-stretched out in each direction, with a little room to spare.

In the table above, a small extra allowance has been added to the minimum floor space allocation for miniature dachshunds. This is for the following reasons:

It has been suggested that dachshunds should be confined to a particularly small crate following IVDH incident in order to protect the spine from further damage. However, there is no evidence to support this opinion. A search of the literature has only brought up one study looking a the effects of crate-rest on dogs recovering from IVDH. In a retrospective study looking at 223 dogs of various breeds (mainly dachshunds) conservatively-managed for T/L disc herniation (Levine et al 2007), use of cage rest made no difference to outcome. 56% of the 55 dogs with no cage rest had a good outcome. Dogs were grouped according to number of weeks of cage rest (0-1, 1-2, 3-4, >4 weeks). There was no difference in outcome between the groups. Out of all the dogs, 54.7% had good neurological improvement.

During recovery from IVDH, the purpose of the crate is not to immobilise the dog, but to prevent accidents and exuberant activity. Activities to avoid generally include jumping (e.g. on and off the furniture), moving over slick surfaces, running, ball play and rough play with children or other pets.

The following links provide information to owners of recovering dogs

Choosing a recovery crate or pen

Staying positive during your dog’s recovery

© 2021 The Rehab Vet. Created for free using WordPress and Colibri